The highlight of the inaugral NEKS conference was to hear Sir Vince Cable talking about Theresa May's industrial strategy, which he describe as a 'rebranding [of the 2011 strategy] with some good new features'. He reminded us that the UK abandoned interventionist policies in 1979, a state that remained until Mandelson's car scrappage scheme in April 2009, followed by support for the UK aerospace sector.

Sir Vince told us that he concocted a letter with Michael Heseltine, who had an adjacent office, asking David Cameron to be more strategic about UK government procurement. Two big ideas followed. The first was to encourage long-term, strategic thinking by government, leading to such things as the recently launched National Infrastructure Commission; the second was to directly support key sectors such as aerospace, cars, textiles, apprenticeships and University Innovation Centres. Sir Vince reminded us that we should also question economic wisdoms: in terms of revealed comparative advantage, the UK is supposed to put all its eggs in one basket and concentrate on financial services. BREXIT poses a new question for industrial strategy: do we 'take back control' and become more interventionist, or do we relinquish control to the markets?

In explaining how the UK handles infrastructure today, Bridget Roswell told us about the National Infrastructure Commission (NIC), an Executive Agency that reports to HM Treasury. The NIC is designed to circumvent short-term electoral cycles by developing long-term infrastructure plans for transport, energy, water, sewerage and telecoms. At the conference, I heard several different approaches to long-term planning, but the problems were the same: how do you measure success, which criteria do you use? Francesca Medda (UCL) described a portfolio structuring approach, designed to optimise a portfolio of projects combining negative NPV/high social value projects with positive NPV/lower social value projects. Others, such as Tim Foxon (SPRU), outlined ways to involve the local community in the appraisal and selection of suitable projects.

It is always difficult squaring the circle between objective and subjective approaches to project appraisal. I was reminded of the solution adopted for the schools' funding formula: central government sets the boundaries within which each local authority must work. On the one hand, there is an objective framework that is the equivalent of UCL's social value optimisation. On the other hand, local authorities tweak the formula to meet local needs. However, the option to consider non-financial measures barely features in the infrastructure regulation. Chris Green (SQW) and Nicholas Miles bemoaned that the majority of transport projects look only at 'time saved', which an optimiser would rapidly transform into something akin to Le Corbusier's Plan Voisin: 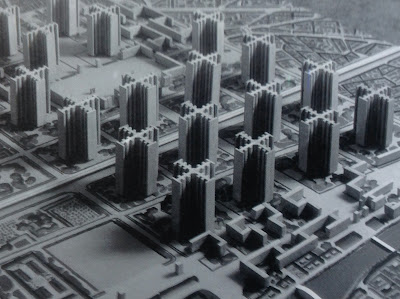 Several conference participants came up with alternative factors that local communities might want to consider: health, productivity, distributional effects, ecological value, direct consumption value, and so on. Goodhart's Law is clearly at play here: 'when a measure (journey time saved) becomes a target, it ceases to be a good measure'.

In several breakout sessions, we discussed how we might persuade private investors to look beyond short-term financial gain. Steve Keen berated economists for narrow-thinking, as did Sir Vince who plugged the 'brilliant book written by Manchester students'. But there was also room for optimism. Sir Vince highlighted the alternative business model of The People's Trust whose objective is to 'achieve sustainable, long-term growth' via an alternative investment fund 'owned 100% by our members'. This is not investment advice, but a £20 bet, to help them launch, seems worth it to ensure an alternative to non-interventionist pension funds.

To sum up: I took away two strategies if we are going to 'take back control'. First, put public funds to better use through localism, or social value index optimisation, or both. Second, reinvigorate private investor activism.
Posted by Neil Lancastle No comments: