There's a simple formula which shows how a speculative bubble can grow. With present value (P) and a positive rate of return (r) to time (t) the value of the annuity (A) rises exponentially:

With a negative return the bubble tends towards zero. Since balance sheets have both assets and liabilities, there are four possible bubbles and anti-bubbles: 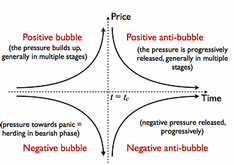 There are much richer mathematical possibilities to represent a return series, such as braid groups; the problem here is not so much the representation as the fact that there are bubbles. The uncertainty could be managed by simply pooling the tail risks, for assets and liabilities. The short-term characteristics are less susceptible to expectations, measurement errors and variance in the rate of return. Only as the future unravels do the long-term characteristics reveal themselves. The pooling of tail risks is a common insurance strategy and, when there is market failure, unravelling these long-term characteristics falls on governments and central banks.

That gives the government or pooled fund a present value to assess risk mitigation projects. If the assets are firms or buildings at risk from climate change, the impact on the long-term value is what matters. Here, there is certainly scope for better maths and better estimates of the risks. Within this pooled fund we already have the tail risks for climate change, and assets that are absent from the national accounts: oceans, forests, air and water.

Whether or not private markets function at these longer maturities is highly unlikely. Poverty and high-risks are indistinguishable, because both are a preference for cash today. Long-term estimates for natural assets are heavily contested, such as the industry figures for carbon. There is no obvious private incentive to mitigate tail risks, except perhaps in a well-regulated and mandatory insurance market. Mitigation projects would convert an uncertain stream of insurance cash flows into a fixed sum: the higher value of the long-term annuity less the project cost. However, few (if any) firms and households insure events beyond next year, let alone beyond their lifetime.

So while pooling tail risks would seem to avoid the excesses of asset and liability bubbles, the quadruple problems of poverty, under-insurance, valuation errors and the government as an 'insurer of last resort' remain. There is no incentive for private interests to deal with tail risks. No-one will join a pooled fund today when they think they have the winning lottery ticket tomorrow. The politics will fail as long as the majority believe they are one step ahead of environmental and financial risks.