"We should all be pluralist now"

At the first QAA meeting to discuss the UK economics curriculum, a senior academic said that "we should all be pluralist now". After 15 months, the review of standards against which UK degrees are peer reviewed is drawing to a close. The revised subject benchmark statement for economics (SBSE) will be published this summer, in time for the 2015-16 academic year.

During the consultation, I finished my PhD and took up a Senior Lecturer position at De Montfort University. However, I continued to work with the committee, along with Joe Richards from Rethinking Economics, and to push for a statement that meets academic and student calls for greater pluralism. 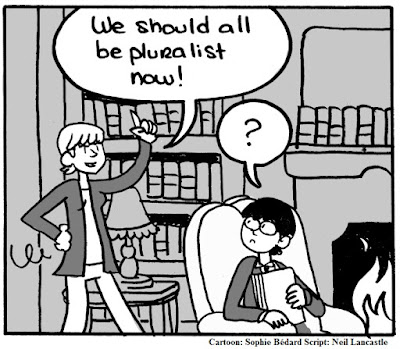 Below are my comments after the last meeting, on 1st June 2015. The final decision on wording lies with the committee chair, and RES Executive Committee member, Eric Pentecost. I am broadly in favour of the changes agreed so far, on the basis that it is better to publish than delay another 12 months, and be stuck with the more narrowly defined 2007 SBSE QAA.

I collected a lot of material during this process. Where these are in the public domain, I have added them to an open Mendeley project. I also archived the ISIPE student letter materials and correspondence from their Basecamp project, including the supporters list: this material is available to ISIPE members on request. I have early correspondence from setting up Rethinking Economics, and was given a copy, by Robert Skidelsky, of his correspondence regarding INET and the CORE project. If you are interested in using this material for research, please get in touch.

Although I am no longer a PhD student, I am actively involved as a Trustee for Post-Crash Economics... the campaign for pluralism goes on!

Nature and context of economics

This section is improved by dropping the word ‘scarce’; re-wording to include ‘phenomena’, ‘past and present’ and ‘evolve’; including finance (‘financial stability and instability’) and distribution as dynamic analyses; adding ‘historical, political, institutional, social and environmental contexts’; ‘evidence-based’ and including 'qualitative data analysis'.

The addition of ‘ethical’ as a context would deal, in part, with consultation suggestions to emphasise ethics.

Section 2.3 is much improved, and suggests interdisciplinary thinking.

The aims of degree programmes in economics

There are other improvements: appreciate ‘the criteria for simplification’; including the word ‘welfare’ and adding the bullet point ‘to develop in students an ability to interpret real world economic events and critically assess a range of types of evidence’.

This section is much improved, in particular dropping the phrases 'core' and ‘a coherent core’; including a study of ‘financial cycles… the role of money creation, banking and the financial system’; and removing the repetition of numeracy skills in multiple paragraphs.

Subject-specific skills and other skills

This is much improved by the addition of Section 5.2 on skills that employers value (evidenced research, communication, economic history and context, pluralism, interdisciplinary synthesis, critical judgment, proportionality and awareness of limitations).

The transferable skills have been improved by the inclusion of ‘psychological biases’; expected re-wording by the chair of the sections around equilibrium, dis-equilibrium and dynamics; inclusion of ‘conflicts of interest’; and a bullet point on markets and market failure.

The subject-specific skills would appear to be common to other subjects (abstraction; analysis, deduction and induction; quantification; and framing)…I don’t think it makes sense to delay publication, but perhaps the QAA can advise on a more appropriate section heading.

The section on numeracy is improved: it is written in simpler English, and includes critical thinking about the sources and selective use of data. The more general wording would seem to address the consultation suggestion to encompass big data and new data sources.

This section is improved by including ‘use of practitioners’ as a teaching approach; and by the broadening of 'context' to include historical, political, institutional, international, social and environmental (but see above regarding ethical context).

This section is improved by replacing ‘economic theory and’ with ‘economic theories (and) interpretations’; and by the broadening of 'context' to include historical, political, institutional, international, social and environmental (but see above regarding ethical context).