Since mid-2013 I have made about ninety edits to the Wikipedia page for Hinkley Point C. It's personal: I was born in Taunton and my parents live about ten miles from the site. Most edits relate to the economics of the project. I also use Hinkley Point C in my corporate finance lectures to discuss uncertainty, discounting and risk.

The figures below use discounting* to estimate different scenarios for the project. The project is very difficult to estimate without knowing the operating profits - in this case, the estimate is from from Peter Atherton at Liberium Capital. I am in favour of renewable energy and the benefits of trade. However, the project appears expensive for consumers from every angle taken.


'Best case' scenario
i) Construction costs** of £18bn from EDF ii) operating profits at £5bn/year iii) decommissioning costs at the lower end of the range of estimates for a similar sized Magnox reactor and iv) a 2.2% discount rate, as used by the UK's Nuclear Decommissioning Authority (NDA) (p. 17) to represent the cost of government borrowing. Remarkably, the NDA now uses negative medium-term discount rates, on the basis these "represent the real-term cost of government borrowing which at the present time, creates a negative rate because the interest payable on UK gilts is less than the rate of inflation – typically in the past the rate was higher than inflation which produced a ‘positive’ discount rate".

This 'best case' scenario at a 2.2% discount rate has lifetime profits of around £100bn, but if Hinkley Point C were funded by the UK government at lower discount rates the 'best case' would be even more profitable for the producer.

'Worst case' scenario
i) Construction cost estimate of £18bn from EDF  ii) operating profits at £2bn/year, which is 40% of the estimate from Peter Atherton iii) decommissioning costs at the higher end of the range of estimates for a similar sized Magnox reactor*** and iv) a 13% discount rate, as used in Green and Staffall (p.38) for the no support scenario. High discount rates mean higher subsidies because the project is considered more risky. Disappointingly, the authors distance themselves from their assumptions, saying that "Commission staff specified the WACC [discount rate] values that they wished us to use for nuclear stations and the policy scenarios that we are testing" (p.3). Even with these pessimistic assumptions, the 'no support' scenario only just fails to break even: 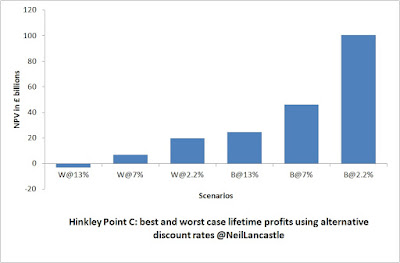 Alternative discount rates
Assuming financial support, i.e.: less risk, a 10% discount rate was proposed by Green and Staffall. Now, all scenarios are profitable, with the 'best case', as above, showing lifetime profits for the producer of around £100bn: 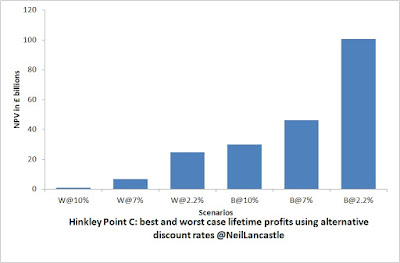 Taken together, it is difficult to imagine this project as anything other than an expensive burden for consumers: with government support from the UK and France, the project is more likely to be financed at lower discount rates. Alternatives, given the falling costs of wind and solar technologies, would be less of a burden on the consumer. If these predictions are even approximately right, other renewables will continue to fall in price but consumers will be locked into a 35-year contract for difference at £92.50/MWh plus inflation.

The tragedy here is that HM Treasury have failed to publish their cost-benefit analyses and justify their use of such high discount rates and pessimistic assumption regarding other technology costs. If they had, the project would have had greater public scrutiny. Instead, the estimated costs to consumers, and returns to investors, remain shrouded in unnecessary secrecy****.


*  For these estimates, the project is assumed to have a 35-year lifetime and steady cash flows, hence the discounting formula used is PV=C*1/r(1-1/(1+r)^n). For decommissioning, the discount formula is C/(1+r)^n).
** Compared with Taishan NPP (China), Flamanville (France) and Olkiluoto (Finland), Hinkley Point C is the most expensive.

*** Estimated as 43% of the costs to decommission Magnox reactors (p.14). Hinkley Point C will generate 3200MWh, compared with 7405MWh for the ten Magnox reactors. Because of the effects of discounting over 35 years, the decommissioning costs are relatively low, from £0.1bn (best case) to £5.7bn (worst case). The best and worst case scenario are based on the range used by the NDA (p. 12) using the discount rates above.
**** There is some good news, in that the European Commission adjusted the 'gain-share mechanism'. Rather than a 50-50 profit share if the project returned above 15%, the revised mechanism will see the UK taxpayer get 60 per cent of any profits above a 13.5% return. However, from the figures above, it appears this is above the project's expected return and the bulk of the profit goes to the producer. There are measures to claw back profits if the construction costs are lower that expected (p. 66), i.e.: EDF will bear the bulk of the construction risk.
Posted by Neil Lancastle