You can get an Uber in Ukraine. Investment is more difficult, because borrowing in local currency (Hryvnia) is expensive. The official interest rate is 12.5%, local currency mortgages cost around 20% and credit cards cost around 40%. To borrow more cheaply, many households took out USD mortgages prior to the Global Financial Crisis but, when the Hryvnia collapsed, these became unmanageable. Subsequently, the parliament (Rada) banned foreign currency mortgages and imposed a moratorium on the confiscation of property by the banks. The government finds it equally difficult to borrow cheaply, with the most recent sovereign Eurobond issue at 7.375%. The cheapest borrowing is reserved for privatised companies that export commodities: for example, LSE listed Ferrexpo, which is 51% owned by Rada member Kostyantyn Zhevago and exports iron ore pellets, has bond yields as low as 3.7%.

Unsurprisingly, Ukranian public opinion is that the financial system is loaded against them. Two-thirds of sovereign bonds are issued in foreign currency, which means that Ukraine must have a constant stream of foreign currency to meet its payment schedules. When Ukraine does well, the Hryvina strengthens and foreign currency is easy to get. When Ukraine does badly, as it did after the conflict in the East, the Hryvina devalues and there is a scrabble for foreign exchange to satisfy creditors. Official statistics suggest that the central bank has enough foreign exchange reserves for about 3.5 months of exports, at $18 billion, but there is another $90 billion held privately by individuals. 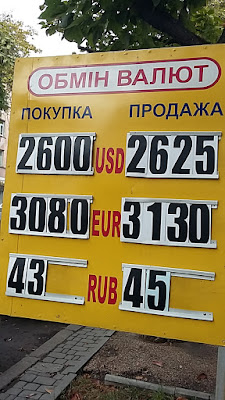 The conditionality attached to foreign loans is depressingly familiar, with the IMF requiring a maximum 3% public deficit, and the World Bank calling for sustainable public pensions. This, at a time when the minimum pension is little more than $2 per day.

And therein lies the trap. Public borrowing is heavily constrained, and private borrowing is too expensive. Notionally, the primary target of the central bank is inflation, and they have implemented tough measures to stabilise the foreign exchange rate. But lowering the interest rate requires reforms to reduce the cost of borrowing from local banks: better regulation, banking competition, less corruption, enforceable contracts, recognised accounting standards and clear accountability. Without deeper reforms, the risk is that the Rada will continue to make the same mistakes: hasty privatisations and sales of public land to ease the budget pressures but, in the process, creating the conditions for a new class of wealthy elites. Part of the problem is the Rada itself, which is unicameral (one legislative chamber) with code-based law. Here, the outlook for reform is less clear.


What’s to be done? At the Ukrfinforum last week (21/9/2017), Yanis Varoufakis called for a new Bretton Woods agreement. The World Bank and IMF could acknowledge that the financial system is heavily loaded against ordinary people, accept the need for International reforms, and back off on the conditionality around sequencing: they could support any measures that reduce the cost of borrowing, including an end to the war. The economy will turn round when Ukranians are confident and able to borrow and invest locally, which in turn will reduce Ukraine’s dependency on foreign exchange being earned by a small number of commodity exporters.