This is a response to the PKSG presentation by Stephen Kinsella on 19th November 2013.

In essence, the stock-flow-consistent approach is ‘to a very large extent an exercise in accountancy – or perhaps logic is a more congenial word’ (Godley, 1983). The paper by Stephen Kinsella extends this approach with a five sector model, estimated using OLS. Applying different spending and tax shocks, he concludes that Ireland's austerity could have been less severe.

Leading into the crisis, Ireland was running small government and current account surpluses. As expected under the 'New Cambridge hypothesis', the private sector ran a deficit. Unfortunately, this was due to investment in property rather than production. Remarkably, the assets and liabilities of the banking sector doubled between 2005 and 2008.

Then, the Irish economy saw major shifts in the composition and direction of capital flows after 2008. Households became net savers, the foreign sector moved deposits our of Ireland and shifted to investment in equity. These effects are dwarfed, however, by government which, in the form of an IMF bridging loan, bailed out the financial sector (purple and red): 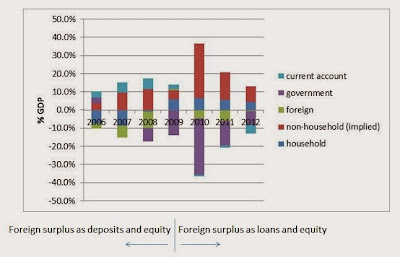 The 'run on deposits' followed the sale of Merrill Lynch to the Bank of America, on the same weekend in 2008 that Lehman Brothers collapsed. If the Federal Reserve had not prevented the collapse of AIG and Merrill had been left to fail, the story would be different: Bank of America is still being pursued by AIG for alleged fraud at Merrill. With the subsequent deleveraging, Irish banks are reporting costs higher than income and Merill looks the most fragile: 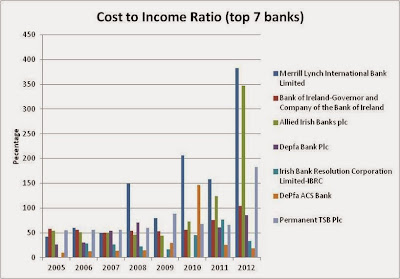 So while the paper recommends less austerity, the banking sector remains a risk for the Irish government. Yet fiscal policy is hemmed in by budget rules from the European Commission. The Treat of Maastricht requires that the government runs a deficit of no more than -3%, while the European Commission Alert Mechanism Report asks for a current account balance between -4% and +6%. Ireland has missed these targets every year since 2006: 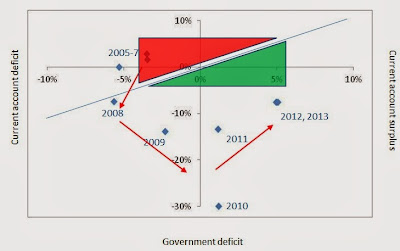 The trajectory, above, suggests some uncertainty that Ireland will reach the green (private sector surplus) or red (private sector deficit) triangles (government deficit less than 3%, and a current account balance between -4% and +6%).

While the SFC model in the paper fits the data very well, like any SFC model it might be further disaggregated: in particular the treatment of shadow banking (ie: leverage); the derivatives book and the effects of currency and duration mismatch. Of course, such data are not readily available. Household spending might also be impacted by wealth, with realised and unrealised capital gains affecting behaviour to varying degrees: Minsky's hedging, speculative and Ponzi modes of financing. Ireland's low corporation taxes also encourage profit retention via foreign investment.

There are other policy alternatives for Ireland: having symmetrical rules for government budgets at the EU;allowing fiscal transfers from 'core' to 'periphery'; and similar mechanisms such that surplus countries pay towards adjustment costs. So as well as the risks from a weak household sector under austerity, there is a risk that foreign capital will dry up or reverse due to tax treaties or tax harmonization being imposed at the EU level. Not that there are many calls for this in Ireland. As Stephen put it succinctly: 'turkeys don't vote for Christmas'.


What is the Reserve Bank of India up to?  On Perry Mehrlings MOOC on the 'Economics of Money and Banking', the students are (quite rightly) asking why interest rates were rising. So while the Fed, ECB, Band of Japan and Bank of England continue with their 'liquidity put' to the international banking system, the Reserve Bank of India is doing the opposite: a 'liquidity call'. I'm hopeful that Perry might weave a few 'liquidity calls' into his own discussions of high interest rate economies.

As the next graph shows, it's not as if inflation was rising prior to the rate hikes in February 2012. Rather, the hike was a response to the fall in the Rupee that began, in earnest, around August 2011 when inflation was actually falling: 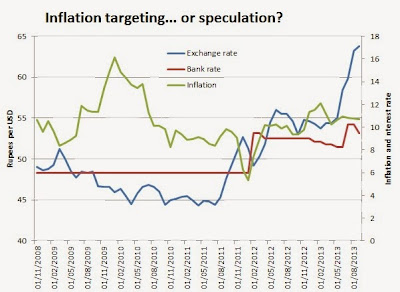 There are indications that the Reserve Bank of India was fixating on inflation targeting in a speech by Dr. Subir Gokarn, a Deputy Governor in June 2011: 'ultimately, inflation outcomes will determine the monetary stance' (Gokarn, 2011, p. 2). As soon as the 'liquidity call' was made, there were profits to those who could second guess the timing and impact.

The problem is that inflation did not fall. Rather, asset prices rose. The Indian stock market 'hit a record high, propelled by an increased inflow of foreign capital' (BBC, 2013). The rather stubborn inflation suggests  that firms are able to mark up their prices and pass on their financing costs to consumers' along with higher commodity costs. That sounds more like a supply problem.

One of the business school cases we teach is that India needs more investment, not chasing asset prices but investing in the supply chain. Gopanith is right that the world benefits from the flow of international knowledge and technology, but must this must go hand-in-hand with financial flows?  The 'cold chain' case that we teach was researched at the India Development Foundation in Mumbai and the Indian Institute of Technology in Delhi: domestically-produced knowledge. These researchers find that 'international trade could be a powerful engine of agribusiness growth in the future.... India could be a sourcing hub for products such as rice, organic produce and food products such as ready to eat meals' (Khan, 2005, p. 13) if only there were investment in logistics, transport and refrigeration. As it stands 'around 35 percent to 40 percent of the total production of fresh fruits and vegetables, is wasted in India, which is about the total production of the Great Britain' (Joshi et al, 2013, p. 1263).

This is a problems with under-investment.  Joshi et al. suggest several solutions: an industrial policy that supports industry players to upgrade infrastructure; the domestic use of refrigerated shipping containers; a reduction in excise duty on processed food; better internet and mobile connections; and greater assurance about the safety and quality of food.

By raising interest rates, the central bank is stifling real investment at a critical moment for India.

Last week, INET and the Fields Institute brought together economists and mathematicians in Toronto. The results were certainly interesting... with several economists paying their homage to Wynne Godley, including Stephanie Kelton, Marc Lavoie, Peter Skott and Randall Wray. It was interesting to see these economists play the same stage. Some speakers felt that bad economics had tainted mathematics: fewer believed the reverse.

I am drawn to Wynne Godley’s models: at least, those versions influenced by Minsky. Naively, perhaps, I was hoping that a new paradigm would emerge from the ashes of the 2008 crisis. Far from it... put two economists together and you get more than two theories... like politics, economics is messy and confrontational. At this conference, the data were sometimes assumed and the theories were more often debated.

There were some contrarians. Perry Mehrling made an eloquent plea for better data on the stocks and flows, something that would surely reinvigorate deductive and descriptive economics. Alan Kirman called for models that explain crises and inequality, rather than such awkward complications being exogenous. The questions were direct: what if the far right interpret MMT as a reason for states to abandon the Euro or, even, their credible commitment? As I write this, I wonder about the symmetry to Perry’s liquidity put at the Fed: countries, like India, where the central bank has placed a liquidity call and speculators are making ‘carry trade’ profits.

There was even a model that confirmed Keynes’ insight that 'there is no limit to the amount of bank-money which the banks can safely create, provided that they move forward in step' (John Maynard Keynes, 1930) . Sometimes, this emphasis on banking left me wondering if the model had lost sight of the instability… with banking assets taking precedence in crises and equity holders absorbing the losses. Stability is not destabilizing, if you have a central bank behind you.

Of the more empirical papers, Didier Sornette gave an excellent presentation that showed few bubbles are preceded by volatility. The relatively simple maths suggested that leasehold assets have a safety valve built-in. Yet the politics are very different if the leaseholder is the Duke of Westminster, or the Chinese government. Either way, if you were to 'deflate the bubble’ by playing with the terms of the lease would you simply turn a financial bubble into political turmoil?

Sadly, not every presenter showed their love of math as simply as Edward Frenkel had the week before. Some of the pleas seemed unnecessary... why would I want to calculate inflation using dynamic field theory? My love, and hatred, of math is because numbers are also social... we irrationally fear Friday 13th, and in the UK we stick doggedly to the penny long after it has any monetary value.

As Matheus Grasselli told me, so eloquently, the Plano Real was essentially social and synthetic, but was able to calm hyperinflation in Brazil by giving an alternative unit of account. Sometimes the simplest maths can improve lives.
Posted by Neil Lancastle No comments: