How to start a crypto-bank run


A friend who is a crypto-currency evangelist gave me a Bitcoin a few years ago, which I jokingly accepted as a 'store of value'. When I heard, in 2013, that China was banning direct trade in Bitcoins, I suggested my friend cashed in on the basis it was a bubble*. He didn't. For a while I rolled the crypto-dice: my gains were enough to pay for a decent family Xmas that year but there was a run on Bitcoin after the China ban and, since then, some of the crypto-currency I was gifted has been seized by the US Secret Service.

I find it difficult to believe there is a 'natural price' or that 'par' will emerge from this chaos: I think insiders will profit and outsiders will lose. To exchange Bitcoin for cash I paid FOUR sets of fees: a percentage to the trading platform; a fixed spread to the settlement platform; an exchange rate fee from USD to GBP; and a transfer fee to a 'recognised' UK holder of GBP: total fees were over 10%.

Crypto-currencies have seen the most unexpected people jump into bed together: drug dealers, geeks, crypto-anarchists and libertarians. On the left, their anger is directed at private interests; on the right, it is directed at government.  But crypto-currencies look like Wildcat banking to me, with an unregulated network of international crypto-exchanges that will collectively run out of liquidity during a crash. Derivative exchanges also come and go. Until the next liquidity crunch, like any Ponzi scheme, crypto-currencies will lure new buyers with their illusion of profits.

Without anyone to uphold 'par', the most obvious lesson is to have stronger regulation of the exchanges. This 2017 tweet sums it up perfectly: 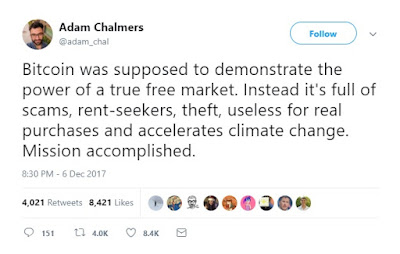 
* This post on Bitcoins makes a good point about their self-reinforcing nature. The basic foodstuff of crypto-banks is the Bitcoin. If derivatives are settled in Bitcoin, and crypto-banks and firms are bought and sold in Bitcoins, their scarcity drives up the price and perpetuates the bubble.